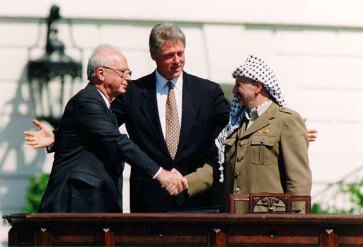 Since the reelection of Israeli Prime Minister Benjamin “Bibi” Netanyahu’s Likud party in Israel’s Knesset election on March 17, there’s been a lot of talk about what these results mean for whatever still exists of a “peace process.” For many commentators and onlookers—human rights advocates among them—five more years of a Likud government brings a deep pessimism concerning the likelihood of foreseeable peace between Israel and Palestine. I, myself, tend to share this pessimism, and I don’t think it very hard to buy into the premise that, in some abstract way, a vote cast for Likud is kind-of-sort-of a vote for extremism on all sides of the battle lines.

Seriously, imagine the jubilee that must be sounding from the yellow-bannered bunkers of Dahiyeh and South Lebanon, or the under-reconstruction tunnel networks in Gaza, right about now. Rather than facing the domestic scrutiny and credibility crises that groups like Hezbollah and Hamas certainly deserve among their own constituents (and the world, for that matter), these groups may instead cite Netanyahu’s particularly ugly campaign tactics, and get back to business as usual. Whether they point to the Prime Minister’s reversal of his 2009 Bar-Ilan speech, his rejection of a two-state solution under his watch, or his fear-mongering warnings of Arabs “voting in droves,” it seems that at least in the short term, Bibi’s bought them some time.

Violent non-state actors like Hezbollah and Hamas justify and publicly legitimize their own acts of violence and/or terrorism under the politically calculated assumption that actual coexistence alongside Israel is not, and has never actually been, on the table. With campaign comments like the above, Netanyahu has single-handedly provided a great deal of weight to the skepticism that asks whether such coexistence is possible, in the absence of external pressure. And external pressure, in its vilest form, is exactly what groups like Hamas are selling.

To be clear: nothing justifies terrorism or the indiscriminate killing of unarmed civilians. Even stripped of such moralism, there’s a million pragmatic flaws in the idea that such violence can ever accomplish these sorts of groups’ espoused political goals. But any analysis would be remiss if we overlooked a certain problem of democracy here. Without diving too deeply into my fuzzy undergraduate memory of Rousseau and social contracts, there’s something especially depressing in the fact that Netanyahu’s revolting, xenophobic green light comes with the backing of a democratic majority (technically a plurality, but you get what I’m saying). On the last days of the campaign trail and behind in the polls, Bibi stood ideologically naked, exposing to the world how he actually feels, or at the very least, how he strategically would have needed to feel in order to get reelected in Israel—and it worked.

There’s real hazard in talk like this. When the workings of representative government mutate a toxic elected official or political party into a toxic body politic writ large, then, at least in this conflict, it becomes dangerously easy to casually slip into overblown common denominators: the essentialized and “inherently” dichotomous fictions of Israeli v. Arab or Muslim v. Jew. Stated differently: What is undoubtedly a century-old political problem—surely one with a political solution—suddenly starts to feel a lot more explainable and readily understandable in terms of the binary narratives offered by the extremist opponents of that exact, hoped-for political solution. These sorts of groups, which have existed on both sides in various forms well before 1948, are the ultimate antagonists of lasting peace in the region.

Instead of accepting such narratives, which can only exacerbate the Israeli-Palestinian conflict, the question right now should become, “How else might we make sense of all this?” As discussions about the status of a two-state solution heat up internationally, we must revisit the political circumstances that have birthed this Likud reelection—a victory fueled by ethnic tensions and toxic dichotomous language.

THE MANY SLOW DEATHS OF OSLO

Palestinians, Israelis and the international community alike have all grown increasingly frustrated and wary of the Israeli-Palestinian peace framework first adopted under the 1993-1995 Oslo Accords. At risk of bulldozing the nuances, a crude summary: The Oslo I Accord, negotiated in Norway in 1993, established mutual recognition between the State of Israel and the Palestine Liberation Organization (PLO), and created the Palestinian Authority to semi-autonomously govern some of the occupied territories for an intended interim period. The Oslo II Accord, signed in Taba, Egypt in 1995, created the current Areas A, B and C jurisdictional schema in the West Bank, which is still in force today, and established a degree of economic and security cooperation between Israel and the Palestinian Authority.

Collectively, neither plan promised Palestinian statehood, but created a procedural apparatus for hashing out an embryonic prototype of an eventual two-state solution. By showing tangible and immediate acts of goodwill on both sides, the goal was to build a negotiating relationship that would foster a final-status agreement. The Oslo Accords promised mutual-recognition and small steps towards peace, with the ultimate goal of reaching a final agreement based on UN Security Council Resolutions 242 and 338 within five years of the Accords’ adoption.

To some, the degree of step-by-step conditionality structurally built into the Oslo Accords meant that they never realistically stood a chance from the start. Perhaps. But it is also true that both Israel and the Palestinian Authority did take tangible measures—sometimes at great political cost—to meet and exceed their obligations under Oslo. Indeed, Prime Minister Yitzhak Rabin paid for Oslo with his own life, assassinated by a Zionist fanatic just weeks after signing Oslo II. And yet, by and large, the Accords were met with popular support from both Israel and Palestine. Although Hamas and Islamic Jihad boycotted Palestine’s post-Oslo 1996 elections, the results do represent a high-water mark for hopes of peace and mutually negotiated Palestinian sovereignty. Yasser Arafat’s landslide victory with 88 percent of Palestinian presidential votes represented more than tacit approval for the PLO’s peace efforts, and a popular mandate for Oslo itself.

Things fell apart, of course. A brutal terrorism campaign launched by Hamas, combined with Israel’s own lackluster implementation of Oslo initiatives (settlement freezes, to take just one example), would mean that by the end of that five-year Final Settlement deadline in 1999, both parties had largely forgotten those mutual acts of goodwill first birthed by the process. The failure of the Camp David peace attempt in 2000, the Second Intifada and Israel’s launch of Operation Defensive Shield in 2002 represented the first major death of the Oslo Process.

In the 2006 Palestinian parliamentary election, Hamas’ radical Islamist coalition won a shocking 74/132 seats in Palestine’s interim-legislature, causing a subsequent civil war between Fatah and Hamas. This election, the lasting rift between Gaza and the West Bank and monolithic statements made about Palestinians being untrustworthy partners in peace could easily be said to represent a second deathblow to Oslo. The loss of popular support for the formalized peace process among Palestinians would mark a much more difficult derailment of peace, not easily fixed by any forced-sit down among the parties.

As hinted above, such a loss of popular support should not have surprised anybody. The Palestinian disillusionment with the Oslo Accords was entirely reasonable, in the face of ongoing Israeli colonial projects, renewed direct occupation, shattered optimism at sovereignty and the Palestinian Authority’s own crippling corruption and gross maladministration. With a constricted Bantustan economy (or an outright blockaded economy in Gaza, post-2007) and unceasing loss of dignity under the brutalities of occupation, ordinary Palestinians failed to ever see any tangible and concrete benefits stemming from the political trust-building process that was the Oslo Accords.

FIVE MORE FOR BIBI: THE LAST DEATH OF OSLO

Until recently, little had changed in the lives of Palestinians. The period since 2006 has been marked by continual settler expansion, the demolition of Palestinian homes and agricultural crops, restricted access to resources and sources of Palestinian livelihood and intermittent periods subjected to direct and disproportionate Israeli Defense Forces (IDF) violence. Whether one supports or condemns the Palestinian Authority’s recent efforts to pursue heterodox, perhaps even quasi-unilateral solutions to their ongoing plight, what we are seeing today is a logical ending and a final release from the paralyzing aftermath of the Oslo Accords.

Truthfully, nobody knows where this leads us. And it is this exact renewed sense of wilderness that in large part explains Netanyahu’s latest electoral miracle: a development that will likely position him as Israel’s longest serving Prime Minister since David Ben-Gurion. Change is scary. With Abbas pursuing justice in international forums entirely beyond the horizons of the traditional peace process, and with Palestinian nods toward ending security cooperation in the West Bank (the definitive ending of Oslo), the political utility of Bibi’s cheap resorts to xenophobic provocation isn’t exactly surprising. For a man who has furiously opposed the Oslo Accords since their inception, Bibi now finally gets to be the political leader who will steer Israel beyond whatever remains of their grasp. He’s finally won.

Granted, the immediate outlook of peace under Netanyahu is unsurprisingly bleak, and will almost certainly get worse before things can get better. But as we collectively watch the Oslo Accords die one last death in Israel/Palestine, there is still immense hope to be shared that all parties involved will learn something from the Accords’ presently unwinding failed legacy.

Above all else, Oslo’s last shot at a noble death would entail the recognition that, while this century-old conflict’s solution will surely be political in nature, this does not mean that peace can exist solely as some gentleman’s agreement, between politicians. Rather, a future peace must address the immediate and tangible concerns of the conflict’s most direct stakeholders, those that have suffered most viscerally and shed the most blood: ordinary Palestinians and Israelis alike. People actually have to care about peace, or at least be shown its rewards and its benefits. Political goodwill is important, but cannot survive in the absence of popular support. While the failure of Oslo reveals that public patience is a limited resource, it is also, thankfully, a renewable resource. We shouldn’t lose sight of that.

Whatever comes next, Oslo should haunt us and influence how we approach peace in the future. Otherwise, the Oslo Accords will be remembered as little more than a photograph in our children’s history textbooks—two guys shaking hands on the White House lawn, and none of it meant a damn thing at all.

Chris Beall is a Staff Writer for Rights Wire.

The views expressed on this blog remain those of the individual authors and are not reflective of the official position of the Leitner Center for International Law and Justice, Fordham Law School or Fordham University.